Annual bluegrass, also known as poa annua, is a turf type most commonly considered a weed or at least a nuisance. It is a winter annual which means it germinates in the late summer/early fall and matures throughout the winter. During the spring it will set seed and then eventually die off during the summer heat... Theoretically...

One of the problems with poa is that many types have been able to survive through the summer and act as a perennial. Poa has adapted very well to low mowing heights. It is able to produce seed at this close mowing height, giving it an advantage over more desirable turf that surrounds it. Their seed is easily spread throughout the course often from clinging onto golf shoe spikes and then being transplanted in a different location. This process repeats over and over. It can even be carried from course to course in this same manner. Once a single plant has taken root it can easily form a colony and overtake a putting surface.
Poa annua is undesirable because of it tendency to die off in hot weather, its off light green coloring and its seed heads. The main problem lies in the pesky seed heads that grow in early spring. At the close mowing height of a putting green the puffy seed heads are aesthetically unpleasing and affect the smoothness of the ball roll.

At Adams Pointe our plan of action for combating the spread of poa is to use plant growth regulators(pgr). If the application timing is just right you can catch the poa just before it goes to produce its seed heads. The goal of the prg application is to stop the seeds from being produced or render the seeds it produces less viable. Certain plant growth regulators can also hinder the growth of the poa annua and not the bentgrass. This would give the desired bentgrass a chance to infiltrate some of the space occupied by the poa.

In this picture is a patch of poa in our chipping green after the plant growth regulator application. The seed heads are not obvious in the photo. You can, however, see the off color which is highlighted more so by the pgr doing its job.

All of this is not to be a deterrence. I just played the course the other day(once a week actually) and the greens are currently rolling great!

As of this week winter is still dragging on a bit with over night temps still below freezing. We are still dealing with frost delays and late starts. But it is officially spring and this years golf season has unofficially kicked off. Our cool season grasses are greening up, slowly but surely, here at the Pointe. Greens aerification on March 21st went relatively smoothly but the cooler temperatures are forcing the healing process to take a little longer this spring. The greens will be turning 25 years old this year! With the greens getting up there in age and usage we have decided to implement a deep tine process every 2 years or so. The half inch in diameter tines can penetrate 4-5 inches deeper into the soil profile than our standard core pulling aerification process. Ideally, this extra depth will help drive our grass roots deeper into the soil and provide a healthy putting surface above.
Between snow storms this winter the crew was able to get a few projects completed. As always over grown brush around the course and in the native areas was cut back. Some trees have been either removed or trimmed up due to damage and/or disease. Other trees have become overgrown and impede play of the course. Most notably, a large cottonwood in front and to the right of the white tee boxes on #3 was removed. This tree was large enough for us to cut down and turn into boards for future use on the bridge that it sat next to. The major project of the winter was of course the aforementioned bridge. The bridge on #3 was in rough shape. 27 boards had to be replaced.
A new set of tees will be opened for play April 1st. A 500 sq. ft. tee has been built roughly 70 yards closer to the fairway on the par 5 10th. The green blocks will be moved from their previous location to this new tee box.

The arrival of fall is always a celebrated time for the maintenance staff. The sometimes brutal heat of a Missouri summer has been survived and another successful growing season is in the books for Adams Pointe Golf Club.

Fall is a critical time for the golf course. The health of the turf going into winter has a direct correlation to the success during next years spring and so on.  As always fall aerification has been preformed to relieve compaction and help with gas exchange in the root zone. Fairways and rough have been overseeded and are already growing in nicely. The entire course has been fertilized. Giving the grass a boost of nutrients in the fall helps the plant store all the carbohydrates needed to survive winter dormancy. 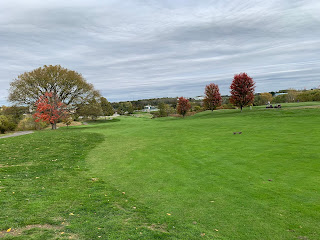 Two pin oaks have been transplanted in the native area along the right side of No. 18. These trees are in the same location as the two previous trees that unfortunately had to be removed over the last couple years. Staff has always felt that the location of these trees is an important visual in framing out the courses closing hole. 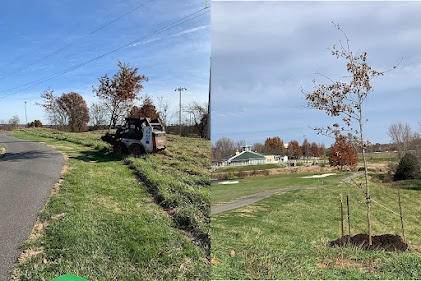 Pin oaks are a relatively fast growing tree that can reach 60-70 feet and will grow 24 inches or more per year. This one is currently around 12 feet or so. 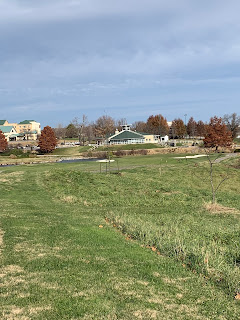 The many grasses of adams pointe 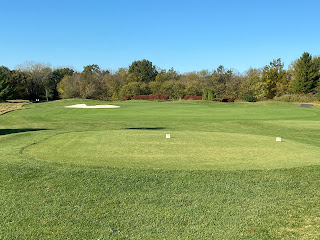 Although we saw 90 degree days late into September, fall is officially here. The sun is at a lower angle, days are getting shorter and overnight temperatures are starting to get cooler. This is all great news for our cool season turf types as they can begin to heal from the summer heat and prepare for winter. Adams Pointe, like many courses, has multiple species of grasses used for it's playing surfaces. The greens and fairways are both cool season bentgrass. The greens are a blend of Cato and Crenshaw bent cultivars while the fairways are composed of Princeville bentgrass. The roughs are mostly a mixture of tall and fine fescues and bluegrass cultivars. The tee box surfaces are a warm season zoysia grass. Mixed into almost all of the course, minus the greens, is a pesky warm season bermudagrass. The course was originally constructed with the bermudagrass and redone in 2004 with the aforementioned turf cultivars.
As a general rule cool season grasses do most of their growing when daytime air temperatures are between 60-75 degrees. Many factors including disease, too much water and heat stress can kill off turf during the summer months. Every year in the early fall both the rough and fairways are overseeded. Along with areas that have died off or thinned out we also overseed into the bermudagrass that has invaded the fairways. Throughout the year it is a battle for ground, so to speak, between the cool season and warm season grasses. During the spring and the fall the bentgrass has the upper hand and a chance to fill in thinning areas. The opposite is true for the summer and the warm season turf types. Bermudagrass is, unfortunately for us, a very aggressive and quick spreading grass. Overseeding in the fall with bentgrass into the bermuda will introduce new plants and hopefully give the cool season grass a better chance in the fight.

Turf disease such as pythium, anthracnose and dollar spot affect highly managed turf during the hot and humid summer months. This July has been no exception as the humidity has been very high all month. Dollar spot is the most prevalent disease on our cool season grasses here at the course. The pathogen that causes this disease can grow when temperatures are between 50-90 degrees but is most probable when temperatures are between 70-80 degrees. Dollar spot, as well as most turf diseases, thrive in wet conditions. Prolonged leaf wetness, most commonly from mornings with heavy dew, cause the disease to develop and spread through the turf.
On closely mowed turf, dollar spot injury is generally 1-3 inches in diameter and are often sunken. On higher mowed turf, they may be as much as 6 inches. Where disease is bad these spots can merge into large areas like in the top picture on this post. In the second picture the growth of fungal mycelium is visible.This mycelium can be transferred from one plant to another from mowing and foot traffic. Left untreated it has the potential to take over and kill a lot of turf but fortunately it is a relatively slow grower and can be both prevented and/or treated reactively after development. The best way to combat turf diseases is having a healthy stand of grass. Low nitrogen fertilizers with micro-nutrients are spoon fed to the greens throughout the stressful summer months. This July we applied two applications of preventative fungicides to the greens that cover a broad spectrum of turf diseases which include dollar spot.

Man, June was a hot one. Halfway through the month it seemed like summer had arrived early and was settling in. We had 12 days in a row of 90 plus degrees and the greens were starting to get heat stressed. We couldn't give them enough water! Fortunately, cooler days came and we were able to needle tine them just in time for the 6+ inches of rain we've seen here at the end of the month.

The practice facilities have seen a sizable increase in usage over the last year or so. The added traffic over the winter has unfortunately caused some damage to the zoysia grass on the driving range tee.  We decided to replace the first 5 feet in front of the artificial mats with fescue sod. 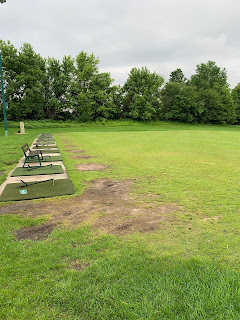 We are currently in the process of adding targets to the driving range. The yardage poles will soon be sodded around with zoysia grass. The sodded areas are shaped to mimic a putting green surface. We are also building a new tee box 40 yards closer to the fairway on No.10. The green tee blocks are going to be relocated to this new tee. We are hoping to have it open for play next season. 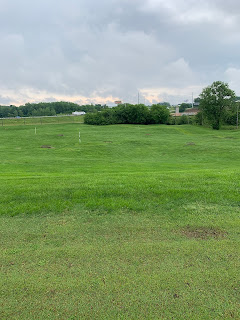 MAY WE GET SOME ROLL


The up and down temperatures this spring have been less than ideal growing conditions. We are 5 weeks out from greens aerification and our punch holes are still not completely filled in. That being said the greens are firm, faster than normal and rolling great! There are many factors that affect the speed of putting greens.
Conditions that we control that affect greens speed:
Conditions that we can not control that affect greens speed:
Obviously, mowing height of the turf plays a roll in how fast or slow the putting surface rolls but that is far from the only factor that affects greens speed. The firmness of the green is a major component affecting the speed of a putt. It is also the larger of the challenges we face as we keep the greens both playable and healthy. Our cultural practices stay fairly consistent throughout the golf season as we mow every morning and roll several times a week. The real battle is in keeping the greens growing healthily with a combination of fertilization and irrigation without too much or too little of either. The USGA has a great article on this topic, which I encourage you to read here.
Posted by Austin Lynch - AGCS at 10:04 AM No comments: