What happened to Spring??? 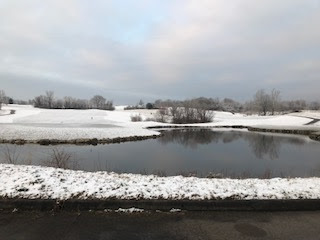 Somehow we completely skipped a season this year going straight from winter into summer.  April was the second coldest month on record with more snow falling this month then the entire winter. May will be the second warmest month on record with a record breaking stretch of 90's for highs.  Memorial weekend felt more like the end of July.  Not just here, but weather has created havoc across the country in several ways and this trend doesn't seem to be changing.  Doesn't do much good to complain about it either as Mother Nature will ultimately control our world.  Good luck to all the grass growers out there this year and to anyone else that is affected daily on the unpredictable nature of our wonderful weather.
Posted by Austin Lynch - AGCS at 8:34 AM No comments:

Welcome to the New Look of Adams Pointe...

Bunker renovations here at Adams Pointe Golf Club have finally been completed. We have reduced the total number of bunkers on the property from 37 to 30. Removal of certain bunkers was necessary because of flooding and other maintenance issues while others were removed or relocated because of lack of play. We feel these renovations have made the golf course more aesthetically pleasing and also maintenance friendly. The Arkansas Premier Play white sand stands out and defines the bunker edges nicely. This sand also has a high infiltration rate. That along with the Better Billy Bunker liner and new drainage systems should hopefully reduce, if not eliminate, washouts and standing water issues.

With the bunkers just recently being finished some of the sand feels soft and is susceptible to the dreaded "fried egg" lie. This is more prevalent on the front nine since the back nine was finished a few months ago. Over time and with a few heavier rains the new sand will settle and become a more consistent playing surface.